Countries I have Visited

OOPS! - Forgot to post any show notes on my Maui podcast on Dec 26th. A casualty of vacationing! Anyway, you can download that podcast here

I travel a fair amount internationally, but I have never been one to try and collect as many countries as possible. There are, however, some big gaps in the world that I would like to fill some day, and which you can see in the map below. You can create your own map for pasting into a website form the link below. In fact, my map is quite similar to that of the most visited countries of the world among people who have used the Visited Countries website to create their own "traveled to" maps. The major exception is that I have seen a lot more of Southeast Asia than other users of this web service. Note that I just barely stepped foot on the soil of some of countries listed, but that's all it takes for bragging rights!

create your own visited countries map

The site also has a US States map feature, and here is mine:

create your own visited states map

Thanks to my daughter Lauren for sending me this link!

And check out Douwe Osinga's other mapping and non-mapping tools!!
Posted by The Travel Geographer on Saturday, December 24, 2005

This time period between the Fall and Spring semesters will mostly focus on my travels and perhaps some other miscellaneous items. This week's podcast is a follow-up to my recent trip to Malaysia (see last week's posting). The big tourism-related issue in Malaysia these days surrounds accusations of mistreatment of Chinese visitors to Malaysia. Listen to the podcast for details.

FYI - The online classes that I will be teaching next semester (starting mid-January) at Northern Arizona University include:
* GGR 376 - (World) Regional Geography of Travel and Tourism
* PL 376 - Planning for Sustainable Tourism
* GGR 576 - Geography of Tourism and Recreation (graduate seminar)
* PL 599 - Tourism and Community Planning (graduate class)
-- More information on these classes (except the last one) can be found on my university homepage at: http://www.geog.nau.edu/~alew/
-- Registration information can be found at the NAU Distance Learning website: http://www.distance.nau.edu/?MAINNAU

* Unsigned Podcast - A podcast about independent artists. In music, or whatever. Bringing you music, news, and ideas from the independent world. http://unsignedpodcast.com/
* Chris Doelle - Riding with the Window Down podcast
http://www.chrisdoelle.com/write.htm

Shah Alam is an interesting story, which explains my initial impressions posted in my podcast. Kuala Lumpur used to be the capital of Selangor State. In the early 1990s, Kuala Lumpur was made a separate territory, and Selangor was given funds to create a new capitol. Rather than making the city of Klang, which is the major port city for KL, the new capitol, Selangor chose to build a capitol from scratch on former rubber tree and palm oil plantations. Shah Alam was built about 1995, which explains why it all looks so (relatively) new. In addition, although the downtown area, where I am staying, is quite compact and very walkable, the rest of Shah Alam is sprawling with industries, warehouses, and subdivisions. It is the main industrial region for KL. This explains the middle class aura of downtown Shah Alam.

I walked over to the imposing Selangor Blue Mosque yesterday, but arrived just after 4pm, during which the mosque is closed for prayers for an hour. See the photo below. 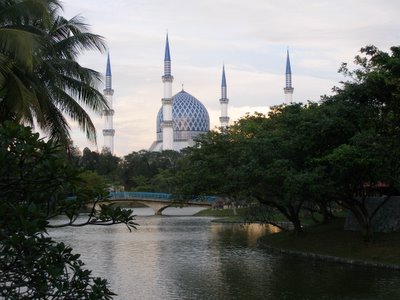 After the conference today, several of us got a tour of the UiTM (University Technologi MARA) campus, which sprawls over several hills. The newer science and technology buildings are huge and very modernist! UiTM campus in Shah Alam is a comprehensive university with about 40,000 students,most of whom ar Bumiputra (at least partially of Malay or tribal ethnicity). Together with its satellite campuses found in every Malay state, it has about 100,000 students!

The "i" in UiTM is a holdover from the university's former name: Institute for Technology MARA. Before that (in the 1950s) it was MARA College. MARA stands for the Majlis Amanah Rakyat (Act), which I believe translates as "Council of Trust for the Indigenous People." Click Here for an interesting article about UiTM.
Posted by The Travel Geographer on Monday, December 05, 2005

After an 18+ hour flight from LAX, I am now in Malaysia, with high speed Internet from my hotel room.

This week's podcast is a short, 12 minute, look at Shah Alam -- the capitol of the State of Selangor in Malaysia. Includes of soundscene of the playground and Blue Mosque on the town lake.
Posted by The Travel Geographer on Friday, December 02, 2005