Platial.com is a social mapping website. Starting with something like QuickMap.com or Flagr.com, but with del.icio.us or Yelp.com social bookmarking and commenting. You can create maps to bookmark your favorite restaurants or restaurants that you want to try out this weekend. And you can create social maps that people contribute to, like this one where people indicate where they were on September 11, 2001: 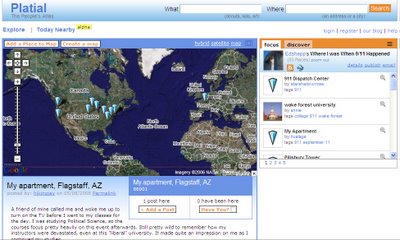 The makers of Platial refer to their website as Neogeography, which they define as:

"a diverse set of practices that operate outside, or alongside, or in the manner of, the practices of professional geographers. Rather than making claims on scientific standards, methodologies of neogeography tend toward the intuitive, expressive, personal, absurd, and/or artistic, but may just be idiosyncratic applications of 'real' geographic techniques."

There is also a "mini-mapper" Firefox plug-in that works with the Platial website. This, and other mapping and Platial topics can be found on the Platial blog.

I personally did not find it the easiest site to navigate and search, it was a bit frustrating at times. And there is a quote on the front page from National Geographic Magazine stating that Platial combines mapping and blogging. I am so sure how accurate that statement is -- I guess it depends on how you define "blog". Despite that, I think it is a worthwhile site that people who like to think spatially could organize their notes around.
Posted by The Travel Geographer on Wednesday, August 30, 2006

Worldmapper: The world as you've never seen it before

The WorldMapper site shows a wide range of social and demographic data, including a whole series of tourism and travel related maps.

The example below the relative number of international tourists that each country received in 2003. If you click on the title above, you will go to this map. Click on next and you will go to many more tourism-related maps.

The maps are really cool. And this one also shows a particular pet peeve of mine. It is obvious that the countries of Europe receive more international tourists than any of the others. Only the US and China outside of Europe have any significant size comparisons. However, are the borders within Europe really international borders? Personally, I do not think so. Passing from one country to another in Europe is no different from passing from one state to another in the US or Australia, or from one province to another in Canada or China. As such, the international arrival numbers are considerably over-inflated in Europe, in comparison to the rest of the world.

Anyway, these are the numbers that we have to live with today thanks to the World Tourism Organization (aka UNWTO) -- a bogus United Nations affiliated organization that charges for most of the data it collects and the services it provides to developing countries -- unlike other true UN bodies.

This week's Travelography discusses some of the short and longer term impacts that may come from last week's arrest of terrorists in the UK. Plus, a couple of American tourists get themselves into some unusual trouble in Europe with magic mushrooms and muggers.

In this week's Geography for Travelers podcast I talk about my recent visit to Melbourne, Australia. We did a lot during our three full days there, but the highlight for me was the penguin Parade on Phillip Island, south of Melbourne. There are a few soundseeing audio clips sprinkled in the podcast that I hope you will find of interest. You can find photos and a travel diary of my Melbourne visit at both VCarious.com and MyLifeOfTravel.com.

And what they say about doing soundseeing tours is right -- it sure takes a long time to edit those!!!
Posted by The Travel Geographer on Thursday, August 10, 2006

Last minute travel travel has reached $10 billion in sales a year, as more people procrastinate while looking for the best deal. US air fares reach all time record highs, at least for most airports, as do US gasoline prices. Also, everyone loves going to the beach!

Quikmaps.com - maps for the masses

Quikmaps.com - Maps for the Masses

This may or may not be "Travel", but I did think it was something that geographers and budding geographers should know about, given our historic love affair with maps!

Quickmaps.com allows you to "Draw pictures and label things on a google map using simple clicks and drags." This is Fun! It is still in beta, and the "draw Lines" tool did not work for me in Firefox, but the "scribble" line drawing tool did work. This is a neat way to draw the maps that you want - to your house, to the party, and to the beach!

I have not tried these other options yet, but according to the website, once you have drawn your maps you can:

"Blog it! - Post the map on your blog or website. Quikmaps hosts your map, so you don't need to sign up for a 'google maps api key', or anything like that. All you need is a blog.

Change it! - Quikmaps hosts your maps, so you can come back and edit them whenever you want. After you save your changes, your maps will update themselves.

NEW: Use A Map.com is another online mapping tool that you might want to check out. They describe themselves as: "A free service that provides you with a map that has a short URL, for example useamap.com/ourplace which is easy to remember and share with others."

Where the Hell is Matt?

Where the Hell is Matt.com

There are a lot of travel diary blogs out there, making it hard to stand out in the crowd. Personally, I write my travel diary blogs as much for myself (to remember), as providing potential information for others to use. However, if you are creative, you can get seen. And that is what Matt has done, in a simple, but effective way: Matt dances around the world. Oh, and he blogs about the places he visits, as well.