There was a sitcom from youth called "Car 54, Where Are You?" about the antics of some wayward NYPD policemen who drove car number 54. This came to mind as I wrote some notes in my dive journal about my 54th dive, which I did yesterday on Pulau Sapi, just off the coast here in Kota Kinbalu.

I recently decided to try and do at least one dive a month while I am here in Malaysia, excluding January, when we arrived, which is generally not a good dive month due to the monsoons.  In early February, I went diving at Mamutik Island, which is close to P. Sapi and also part of the Tunku Abdul Rahman Marine Park.  I did three dives yesterday, the last day of March, at Pulau Sapi.  And I hope to get two dives in April, if possible -- other travels may get in the way.  In May, I will be diving at Mabul and Sipidan islands, the latter being one of the top dive destinations in the world.  In June we head to Peninsular Malaysia, where I will have a couple of opportunities to dive before we leave Malaysia at the end of the month. 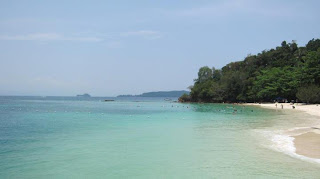 Pulau Sapi is the smallest of the five major islands that make up Tunku Abdul Rahman National Park (the islands) and Marine Park (the underwater areas), which is named after the founding father and first prime minister of Malaysia.  The islands have become a huge tourist attraction for Kota Kinabalu, mostly drawing tourists from East Asia who are looking for a sun, sand and sea destination.  The islands are developed by Sabah Parks as recreational parks, with grassy picnic areas, a small restaurant, roped off areas for swimming and snorkeling, and banana boats and other recreational activities to partake in.  Hiking trails are also found that go into the interior jungles of the smaller islands.  Pulau Gaya is much larger and has several high end resorts scattered on its edges, as well as large illegal immigrant (Filipino) settlements on parts that are outside of the national park.

Many people have told me that Pulau Sapi is their favorite island in the national park.  I actually never stepped foot on it, as I was either on the boat or at a restaurant on P. Gaya, a short distance away from P. Sapi.  My wife (not a diver) signed up for snorkeling and had a great time, seeing a lot of coral and fish while snorkeling with a guide and hanging out on the beach on P. Sapi.  She was the only snorkeler with Diverse Borneo that day, and so she had a personal guide to show her the highlights in the coral reef.  We met for lunch and she did her third guided snorkel off the boat in the same area that I did my dive #54. 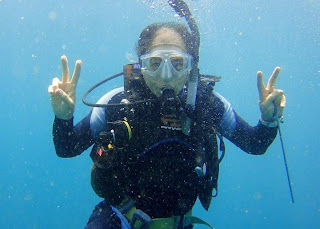 Dive #52 and #53 were both really good. Looking back at my photos, the best ones were from the first dive (#52) at Clement Reef. The sunlight must have been just right for that dive to bring out the color, which can be a challenge underwater.  I actually thought the second dive (#53) at Agil Reef was better than the first while I was doing it, both in terms of coral and fish.  I saw a very large porcupine puffer fish, though mostly the fish I saw throughout the Sapi area were on the small side.  My wife said that she saw large fish snorkeling.  The two reefs for #52 and #53 were on the back side (the South China Sea-side) of the island, away from the beach and town side.

After the second dive we picked up my wife and had lunch at the restaurant on P. Gaya.  The food was great!  We had curry chicken with rice and fried kway teow (flat rice noodles) with seafood. The noodles, in particular were delicious.  On the other hand, I think most any food tastes really good when you are diving. We sat with my dive buddy from the second dive.  He was from the Tubingen area of Germany, where I had taught a semester many years ago, though he now lives and works in Shanghai. 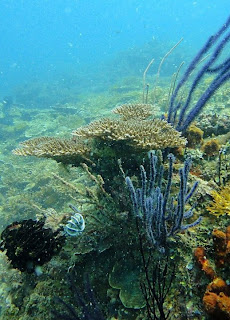 Dive #54 was at the Coral Garden reef, which was just beyond the Sapi Beach swimming and snorkeling area.  I was amazed at the great diversity of coral in this area.  There were many different kinds coral, all densely jumbled up and blanketing the ground.  I was going a bit crazy taking photos and videos, though the resulting pictures were less colorful than from the earlier dives.  As I was doing this, I kept falling behind my group and had to paddle to catch up.  Once I lost them entirely in the murky waters  deeper down, but found them quickly by swimming in the direction they were going ... or at least I think I found them.

After taking a short video, I again could not find them.  I again swam in their direction and soon found the orange fins with a white cross on the bottom that our group's guide was wearing.  I did not lose them again, but was kind of surprised when he started heading to the surface, as I still had about 70 bar of oxygen left (normally the dive ends at about 50 bar).  It was also only about 35 minutes into the dive, instead of the ussual 45 or more minutes.  However, sometimes there are reasons to end a dive earlier than expected, so I went up with the others.  At the top of the water, much to my surprise, I discovered that this was not my guide.  It was a different guide for a different company (Borneo Dream). 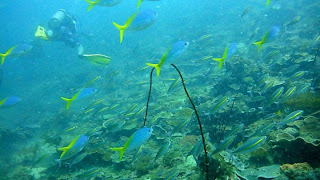 OOPS!!!  I had lost my group on dive #54.  This was the first time this had ever happened to me, and it was very embarrassing.

I was surprised at how far away my group had come up compared to where I came up.  I am guessing that there was a strong current, which is why my group kept getting so far away from me. The Borneo Dream boat came to pick up its divers and offered to take me to my boat.  That was nice of them.

When I got to our boat, others from my group were just starting to return.  They had told my wife that they had lost me. She thought they might just be kidding -- until the other boat appeared with me on it!  My guide was actually out looking for me and did not get on to our boat until  just after I did. 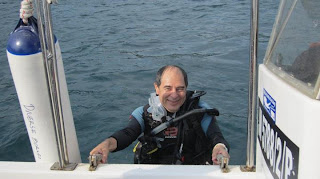 I readily agree that it was my fault for falling behind the others and not paying close enough attention to where they were.  On the other hand, we did not have "dive buddies" on this last dive, as we did on the second dive.  (My German dive buddy only did the two morning dives and was not with us.)  I kind of think that if I had a dive buddy on this last dive, that I would not have gotten lost. Maybe I need to proactive in asking guides in the future to assign buddies.

Also, in the future, I need to carry my emergency signal tube, which is a long orange plastic tube that you fill with air so people can easily find you on the surface.  I have one, but never bring it when I actually dive.  If I had lost my group and not found another (which I actually thought was my group), I would have slowly made my way to the surface and waited there for someone to find me.  That is the appropriate way to deal with being lost.

Dive 54, where are you?  Yes, I was embarrassed by my dive #54 -- but at least not until the end, after I had actually finished diving for the day! 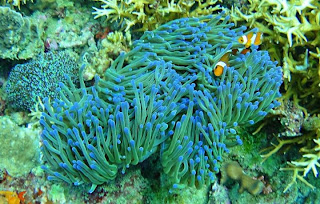 On a somewhat related topic....

I am also embarrassed by this new promotional effort to sell Sabah to China.  A local company here in KK has hired 13 "Beachhoney Models" from China (famous for their bikinis) to sell Tunku Abdul Rahman National Park in an effort to get even more Chinese to visit Kota Kinabalu and Sabah.  The Tunku would probably turn over in his grave!  While I find it both exploitative and the wrong message/image for Sabah, it will probably work with China, and unfortunately tells a lot about the future of tourism development here in Sabah, which used to be (and mostly likely still is) among the premier ecotourism destinations in the world.